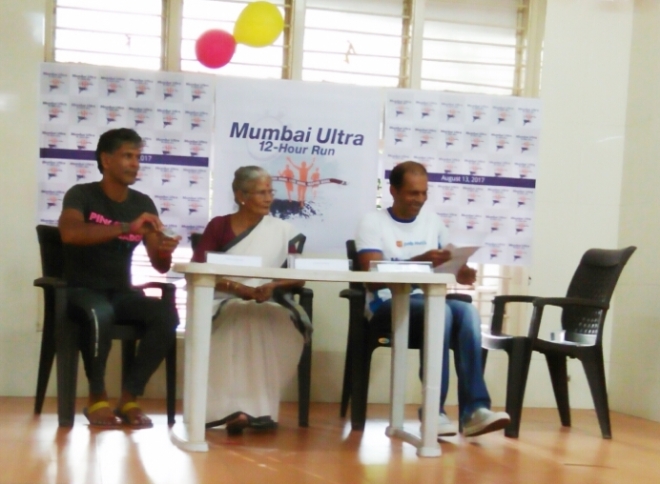 The former professor of bio-chemistry and mother of model, actor and endurance athlete, Milind Soman, will be the oldest participant in the fourth edition of the Mumbai Ultra: a 12-hour run. She hopes to cover a distance of 40-45 kilometers. The youngest participant is 18-years-old. Apart from Usha Soman, three more persons in their seventies will be participating.

Unlike the previous editions when the event was held on Independence Day, August 15, this time the 12-hour run will be held on August 13, a Sunday. “Due to security reasons, the run date was decided as August 13 and not August 15,” Naveen Hegde, one of the organizers of the running event said at a press briefing in Mumbai on Tuesday (August 8, 2017).

Participants are expected to run loops of 11-12 kilometers starting from MGM Swimming Pool at Shivaji Park, from 5 AM till 5 PM.

“This is an iconic running event with a strict cap on the number of runners. This time there will be 500 runners,” said Milind, who earlier this year completed the Ultraman.

“It is quite a privilege for the city to have an ultra-running event in the heart of the city,” Milind said adding that he will be participating in it for the first time.

About 300-400 volunteers will be engaged in fulfilling various needs of the runners alongside 100 doctors and physiotherapists.

Col Gulshan Chaddha (Retd), Principal of Himalayan Mountaineering Institute, has been roped in as the race director.

Usha Soman’s foray into this running event can be traced back to a video clip of her running barefoot alongside her son Milind during his Ahmedabad-Mumbai run last year. The video went viral at that time prompting the septuagenarian to take up this challenge. She will mostly resort to walking, though not barefoot.

“It is all a mind game. Unless we try we won’t know what we are capable of,” she said.

The endurance event is aimed to act as a reminder to people about healthy living.

Endurance sport is not merely about sport. It’s a lifestyle, says Milind. One has to focus on food, sleep and other aspects. Later this year, Milind plans to run from Dimapur to Kohima. And next year he plans to attempt double Ironman.

(The author, Latha Venkatraman, is an independent journalist based in Mumbai.)